The spread of the Covid-19 pandemic precluded a face-to-face meeting of the GEinCEE CoP scheduled for April 2020 in beautiful Prague. A 2-day consolidating workshop was designed as a forum for exchange of experience and ideas between the representatitves of 15 organisations from four Central and Eastern Europe (CEE) countries (Czech Republic, Lithuania, Cyprus and Poland) that formed the CoP. Instead, the workshop was turned into a series of three online events: two interactive sessions (22.04 and 15.05) and a webinar (27.05). The meetings were successful in terms of attendance – each event gathered up to 21 participants representing 14 different organisations – both universities and research centres – from CEE.

The consolidation workshop was devoted to the evaluation of the GEinCEE CoP approach, planning further activities and deciding on steps to assure its sustainability. The meetings were also an opportunity for exchange of knowledge on current developments in the ACT project, the GEinCEE CoP and its member organisations as well as to learn about gender equality in Czech science and academia.

The discussion on the evaluation of the development of the GEinCEE CoP took place on 22.04 and aimed at reflecting on how the CoP support measures and tools available within the ACT project as well as the approach and activities adopted in our CoP were useful for improving competences of CoP members and achieving objectives of the CoP, including progress towards gender equality in CoP member institutions. The session gave also the opportunity to reflect on main gaps in the previous operation of the CoP. 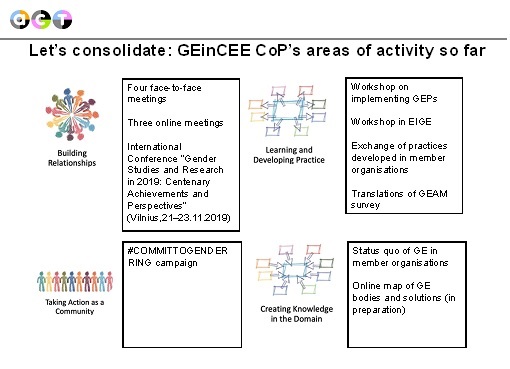 The community of practice approach and the activities developed within the GEinCEE CoP had been recognised as effective methods of strengthening the capacities of gender equality supporters to advocate for change in their organisations as well as facilitating the process of institutionalisation of gender equality in CEE. Being part of a network of committed individuals and experts, and participation in an exchange of knowledge, experience and good practices was perceived as giving courage and expertise to lobby organisational officials for structural change and intensify discussions within organisation on the issues of gender equality. In this context the usefulness of workshops on implementing gender equality plans, gender mainstreaming and building argumentation for structural change was raised. Networking within the GEinCEE CoP – supported by tools for online communication (such as a mailing list and a CoP’s blog) was also appreciated for providing a sense of belonging and giving greater opportunity to cooperate with GE experts from CEE which otherwise would be hindered. Moreover, membership in the CoP was recognized as a factor exerting pressure on member organisations not to lag behind when they see that progress is happening in other institutions being part of a community.

Some gaps in the operation of the GEinCEE CoP were as well identified. These included insufficient representation of CEE countries, challenges concerning cooperation within a big and diverse group, limited resources – both financial and human – available to undertake gender equality initiatives in own organisations, as well as inhospitable climate towards gender equality interventions in some of the countries of the region.

The debate on how to enhance the growth and sustainability of the GEinCEE CoP took place on 15.05 and aimed at consolidating the interests and needs of the CoP members into a mutually agreed-on plan of action. An action plan that would enhance the impact of the GEinCEE CoP through the use of CoP supported measures and common action, attract attention of other stakeholders, including research founding organisations and policy makers and sustain the operation of the CoP after the lifetime of the ACT project. A multitude of ideas concerning expansion, inner diversification and formalisation of the CoP, its activities, promotion and integration were brought to the fore.

One of widely discussed activities was the conduct of the survey based on the GEAM tool, developed in the ACT consortium. It is a comprehensive and ready-to-use tool for gender equality audits in research and academic organizations or organizational units. The results of a regular gender equality status quo assessment would allow for undertaking evidence-based interventions, monitor changes and improving working conditions in participating organisations. The comparability of results, both nationally, regionally and internationally, was recognised as a strength that potentially attracts an attention of policy makers and fosters a discussion about gender equality issues in research and academia in the CEE region. As it has also the potential of attracting other research organisation, the use of the GEAM tool for gender equality monitoring could be recognised as a good practice to be shared with other organisations in the region aiming at structural change, especially as the questionnaire had been already translated into two CEE languages (Lithuanian and Polish) and adapted to the organisational contexts of member organisations.

The third part of the consolidation workshop (27.05) was a webinar on gender and science in the Czech Republic. The webinar was conducted by experts from the Centre for Gender and Science of the Czech Academy of Sciences Hana Tenglerová and Timea Crofony. They comprehensively discussed the issues of the scope of gender disproportions in Czech science, the evolution of the state-level approach towards gender inequalities in academia, gender equality good practices implemented in Czech universities and research organizations and the achievements of the Centre for Gender and Science being the only specialized gender and science centre in Central and Eastern Europe focusing on research, policy and practice.

The consolidation workshop proved to be productive. Good discussions (supported by the ACT co-creation toolkit), inspiring ideas for future development and high turnout compensated for the deficiencies of a distance meeting. The upcoming weeks are devoted to the conduct of the GEAM survey in member organisations and the construction of an online map of gender equality (GE) bodies and legislation, which will be a tool for assessing and monitoring the GE status quo in the region. On the basis of the results of the survey in individual organisations a collective report is expected to be prepared in late Autumn 2020. A face-to-face meeting is cautiously scheduled for November 2020 in a connection with an international conference “Institutional change through implementation of GEPs at the RPOs and RFOs in the CEE countries” organised by the Lithuanian Social Research Centre in Vilnius with the support of the CoP (12-13.11). 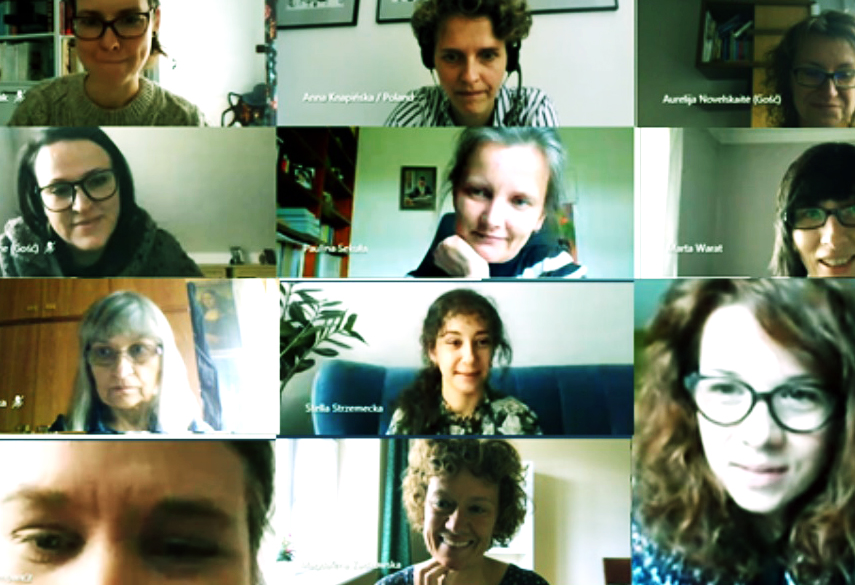