The Conference Transformations in Process: Towards the Institutionalization of Policies and Programs for Gender Equality and Curricular and Pedagogical Change in Latin American Universities and Research Centers took place online, during October 14 and 15th, 2020.

Each session had a duration of two hours, and both had the participation of key figures from our Community of Practice on Gender Equality Policies and Programmes in Latin American universities and research centers, which comprises fifteen prestigious institutions in the region, and is being carried out within the ACTonGender Project funded by the European Union's Horizon 2020 programme.

The objective of this Conference was to share the analysis and learning developed from experiences of institutionalization of policies and plans for Gender Equality, and their impact on curricular and pedagogical transformations in universities and research centers in Latin America. Representatives from institutions in Argentina, Chile, Costa Rica, Mexico and Peru, who are part of the Community of Practice presented their achievements and ideas, and speakers from the Universitat Oberta de Catalunya presented the main advances on this issues in European institutions.

We are currently in a context that forces us to turn academic events into virtual ones, and despite the disadvantages that this implies, it has also facilitated remote participation. In the case of Transformations in Process this meant that the Webinars that made up the Conference attracted a registered audience of more than five hundred listeners. This led to the decision to divide the public between two platforms, Zoom and Youtube, both with live transmission and participation via chat. It is through these two channel’s tools that we can know that we have had attendees from different areas in Argentina, Bolivia, Brazil, Canada, Chile, Colombia, Costa Rica, Ecuador, Spain, Mexico, Dominican Republic, and Uruguay. 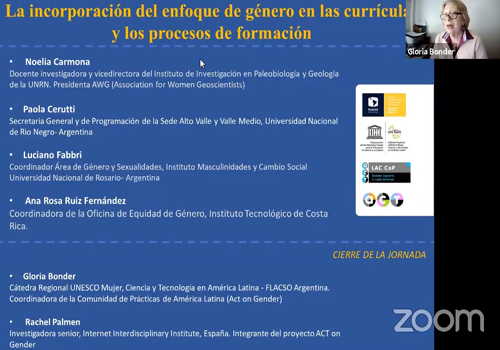 The first webinar, held on October 14th, began with an opening address led by Gloria Bonder, coordinator of both the Conference and of the Community of Practice, and director of the UNESCO Regional Chair for Women, Science and Technology in Latin America from FLACSO Argentina, and Luis Alberto Quevedo, Director of FLACSO Argentina. María del Carmen Tamargo, researcher and faculty member of the Gender, Society and Policies Area of FLACSO Argentina, was the moderator of both webinars.

During the first day of the event, four speakers from different institutions presented their contributions:

- Ana Buquet, from the Center for Research and Gender Studies of the National Autonomous University of Mexico, was the first speaker. Her presentation was rooted on the issue of the institutionalization of Gender Equality policies and their need, and elaborated in the areas of confirmation and recognition of gender-based inequality, and the usefulness of institutional policies to reduce it. From her experience at UNAM, she stressed the importance of political will, and budget, to make these processes a reality.

- Carmen Andrade, from the Department of Gender Equality at the University of Chile, took the floor in second place and shared Buquet's position regarding the importance of institutionalizing Gender Equality policies, and highlighted the strategies developed to carry them out. She also mentioned the importance of expecting resistance to the proposals, and planning networks of action to confront it.

- Florencia Rovetto, from the Office of the Gender and Sexualities Area of the National University of Rosario, Argentina, spoke about the role of the Gender and Sexualities Area of the UNR in the hierarchization of the issues it manages, and its function within the context of the historical intertwining of feminism and university institutions. She stated that given the social expectations that are placed on the university institution, it is even more important to build policies that reverse the unequal conditions in society as a whole, and within the universities themselves.

- The fourth presentation of the date was by Patricia Ruiz Bravo, from the UNESCO Chair for Gender Equality in Higher Education Institutions and also representative of the Vice-Rector's Office for Research at the Pontifical Catholic University of Peru. She focused on the importance of institutional commitment to promote Gender Equality in Higher Education institutions. This importance stems from the idea of justice, from the need not to allow first and second class citizens to exist in universities because of their gender or for any other reason, and to eliminate these differences she raised the need for a critical mass of people interested in change promoting policies, and with a specific strategy to carry them out.

- The last contribution of the first Conference was made by Jörg Müller, from the Universitat Oberta de Catalunya (UOC) and General Coordinator of the ACTonGender Project. Müller expressed that the result obtained by the Community of Practice is extremely satisfactory, and that the virtual format of these conferences puts the organization, unwillingly, in the pioneering role of experimenting and collaborating in new strategies for the creation of knowledge at a distance. He also stressed the importance of continuing to form networks and alliances to deepen the changes and achieve the goals of the Communities.

Following Jörg Müller's words, Gloria Bonder led a section of questions from the audience as a closing statement.

The second webinar was held on October 15th. It began with a new presentation by Gloria Bonder, in which she thanked the attendees of the previous day and welcomed those who joined for this one.

- The first presentation of the day was in charge of Noelia Carmona, who is professor, researcher and vice director of the Institute of Research in Paleo, Biology and Geology of the National University of Rio Negro, and of Paola Cerutti, general secretary and of programming of the High Valley and Middle Valley Branch of the same university. Their presentation referred to some initiatives they are carrying out with the aim of incorporating the gender perspective in the university curriculum. Reviewing contents and including texts and proposals made by women in all subjects, they promote awareness of the contribution of women to all areas of knowledge. They also highlighted the importance of training and permanent updating to establish actions tending to promote contexts free of discrimination in the different spheres of the educational space.

- Luciano Fabbri, coordinator of the Gender and Sexualities Area of the National University of Rosario, then shared ideas about management and how to transcend some of the resistances that are found in the face of gender transversality mainstreaming at the curricular level. He emphasized that androcentrism produces and reproduces in the university environment knowledge relationships based on a deep epistemic injustice, and the importance of political articulation outside the institutions to combat this.

- Ana Rosa Ruiz Fernández, coordinator of the Gender Equity Office of the Technological Institute of Costa Rica, gave the third presentation of the day, which focused on the challenge presented by gender dynamics in a technological university, where gaps are evident at the level of women's participation in engineering and technology. She highlighted her Office’s design of strategies of attraction and permanence, with national campaigns, which made use of narrative resources and visibility of women in key roles to modify the general perspective regarding gender roles in the environment, and how to apply these resources and codes in order to maintain their effectiveness in different careers and contexts.

- Rachel Palmen, researcher at the Universitat Oberta de Catalunya, and member of the ACTonGender Project was the last scheduled lecturer, and spoke about the incorporation of the Gender Perspective in the formative processes, and in the curriculum and categorical practices and views of Europe. She stated that in order to integrate the gender dimension in education, it is necessary to promote gender knowledge in all areas; to include measures to incorporate gender issues in the curricula; to improve awareness and sensitivity to the subject; and to promote specific gender programmes.

The final closing statement of the conference was delivered by Gloria Bonder who, before enabling a last series of questions from the audience, spoke about the importance of making education a space for coexistence, living and learning, based on the values of non-discrimination, and appreciation for diversity. 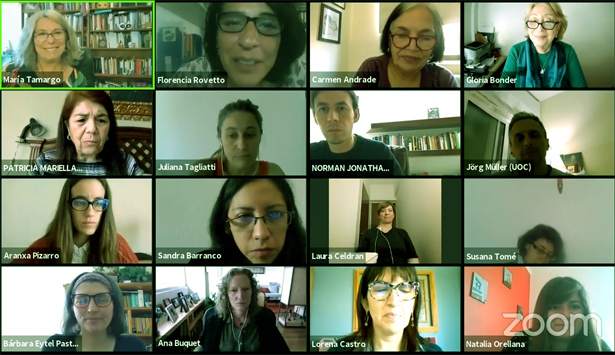