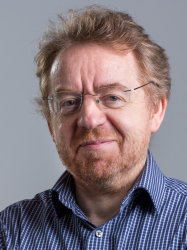 Stephen Curry is a Professor of Structural Biology in the Department of Life Sciences at Imperial College. In October 2017, he was appointed as the College’s first Assistant Provost for Equality, Diversity and Inclusion to direct the Imperial College’s strategy in these areas for staff and students. His research has focused on a variety of problems related to protein-drug interactions and the replication of RNA viruses such as foot-and-mouth disease virus and human norovirus (the winter vomiting bug). An active science blogger, Stephen Curry regularly writes on the larger social and political responsibilities of scientists and has covered many other issues both on his blog and in the national press. In 2014, he was awarded the Peter Wildy Prize for Microbial Education at the Society for General Microbiology. He has served as a board member of the Campaign for Science and Engineering (CaSE), Vice-Chair of the Science is Vital, and on the steering group for the recent HEFCE review of the role of metrics in research assessment, which produced the Influential Metric Tide report. He is current chair of the steering group of the Declaration on Research Assessment (DORA).